Subsidence Guide: Everything You Need To Know

Subsidence is a word that strikes fear into homeowners and buyers alike, but do you know all there is to know about this property issue? We’re here to help out if you don’t!

In this article, we’ll look at everything from the basics of what subsidence is and how to check for it through to fixing it and your position as a seller should subsidence be a problem you encounter.

So, without further ado, let’s start with a quick definition of subsidence, shall we? 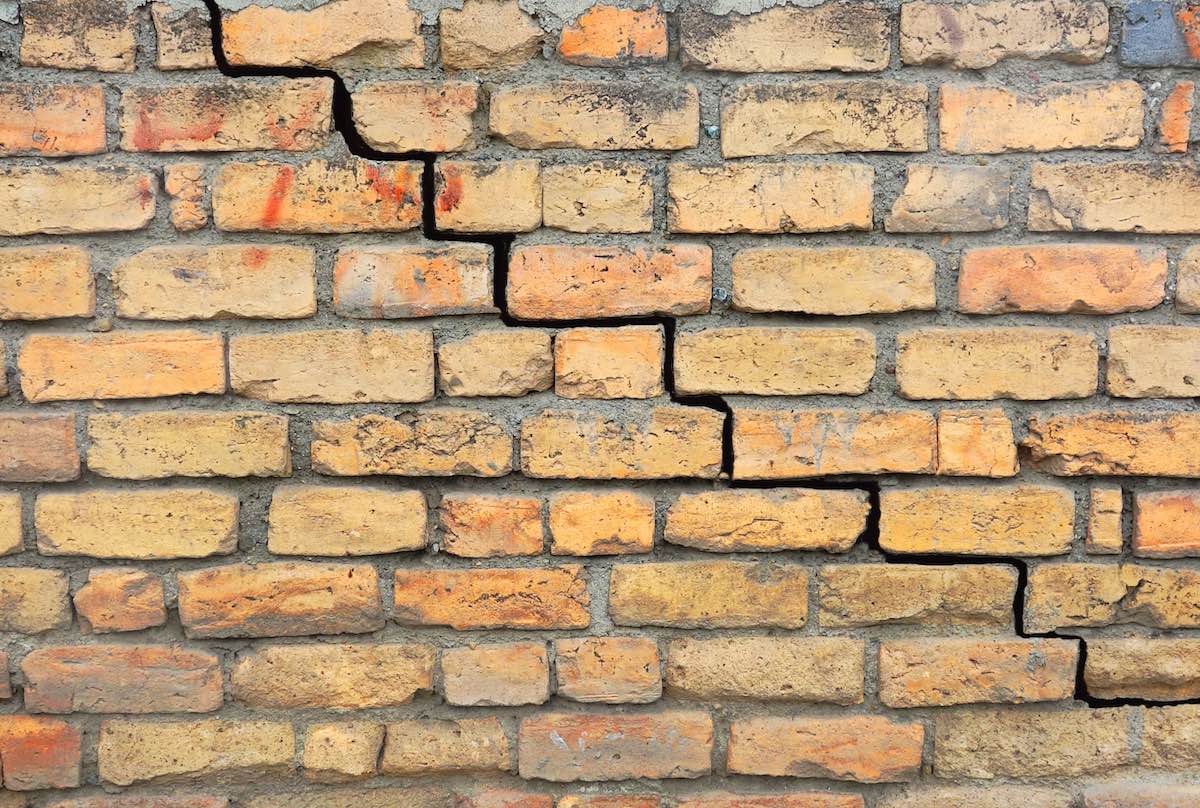 In very simple terms, subsidence in property happens when the ground upon which the structure is built begins to sink or, in more dramatic instances, collapse. This shift can disrupt the foundations and cause the building above to become askew and strained by the movement below.

As the soil is unstable, so the stability of the house is called into question and structural damage can occur. The good news, though, is that it isn’t as scary as it sounds and can often be rectified quite easily, especially if you spot the signs of subsidence early (more on this later!).

The causes of subsidence can be split into two camps: natural and man-made.

Natural causes are obvious when you take a moment to think about the process that is happening when subsidence occurs.

Moisture plays a huge part in subsidence, and problems manifest in a number of different ways. In areas where property is built upon cohesive soils such as clay, for example, subsidence can occur due to the nature of the nature of the soil itself. Clay, like silt and, to a much lesser extent, loam, will swell and shrink with rising and falling moisture content, causing natural shifts which could affect the big pile of bricks above that you’ve chosen to live in.

Non-cohesive soils (think gravel and sand), on the other hand, are not likely to shrink and swell with changes in water content, but they are at risk of being washed away should there be a prolonged period of water flow in the area. This can be caused by extended periods of wet weather or, more commonly, by damaged water pipes (see below).

Some soils will also break down over long timeframes, and this decomposition can slowly change ground levels and affect foundations. Homes built on mixed soils can suffer, too, as the earth responds differently in certain areas, thus shifting and moving at an uneven rate. This can can cause serious problems, as the varying rate at which the soil moves can dramatically impact a property’s foundations.

Trees, shrubs, and bushes can all affect the moisture content of the soil as well, especially when there has been little to no rainfall. Plants, especially more established ones, will draw the water they need to live up through their roots, leaving the soil dryer and susceptible to shrinkage. Obviously, this doesn’t mean you should remove every bit of greenery in sight, but badly planted and landscaped foliage can be a cause of subsidence. This is particularly true if you have thirsty trees nearby like beautiful willows, which are commonly found by rivers for that very reason - they need a lot of water to survive and thrive.

Just as natural causes of subsidence are obvious when you stop and think, so too are man-made causes. The difference is that they are infinitely more frustrating as they could have often been easily avoided with a little more care and forethought.

Common culprits of man-made subsidence problems include poor foundation work and/or improper ground preparation when the property was built, and the reasons for these causes can vary between incompetence to penny-pinching.

Seemingly innocuous things like traffic and nearby building work can affect the structural integrity of a property as well. One wouldn’t necessarily think that innocent vibrations from cars rolling by would have such a dramatic effect, but such persistent rumblings can cause soil to move if traffic is heavy and repetitive.

Again, water plays a big part, but from the perspective of man-made causes, poor drainage or damaged pipeworks are usually responsible. Buildings built near old mine shafts in certain parts of the country can suffer from subsidence, too. Thankfully this isn’t much of an issue in Wanstead!

How to check for subsidence 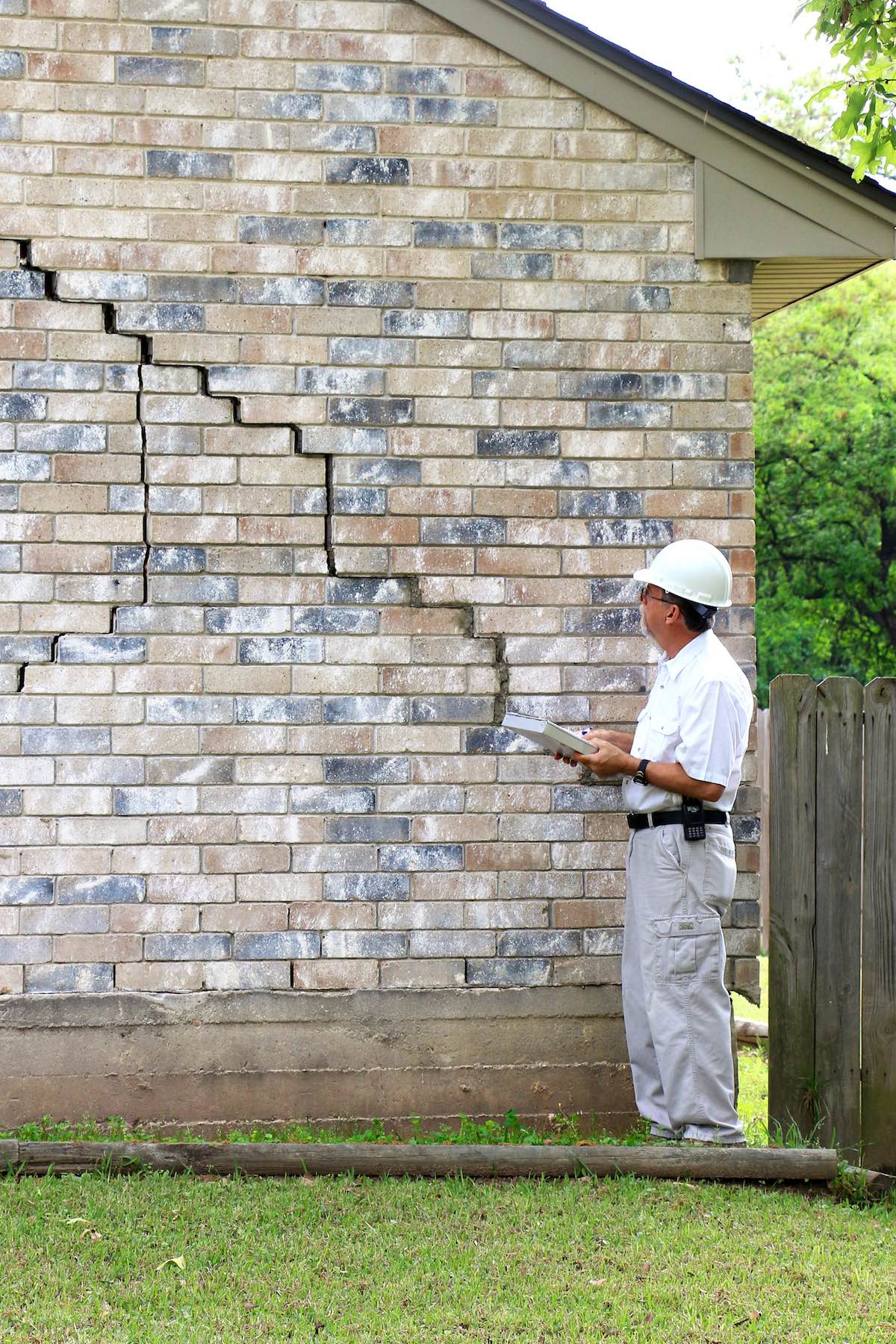 Spotting the signs of subsidence early will make fixing the problem much easier, but you need to keep things in perspective and not let your mind automatically assume the worst (easier said than done, I know). The most common ‘tell’ will be cracks in your walls, but not all cracks are created equal!

Many cracks will be perfectly normal and nothing at all to worry about. Almost every home in the country will have a crack somewhere or other, so it’s important not to worry too much if you spot one. Natural shrinkage of plaster work and even changes in humidity or temperature can cause cracks to appear and, as a rule, these hairline cracks are nothing to worry about.

Subsidence cracks, on the other hand, will look entirely different. Sure, there’s every chance that a crack caused by subsidence will start off small and grow bigger with time, but there’s a difference between monitoring a crack and worrying about it unnecessarily.

Below are some of the ways you can distinguish harmless cracks from those caused by subsidence.

Cracks caused by subsidence can be identified by the following factors:

Look out for drops in flooring, too. If the skirting appears to be uneven or higher than the floor itself, it’s likely you have a subsidence problem. Uneven surfaces elsewhere can be tell-tale signs as well.

How much does subsidence devalue property?

This is a common question posed by those affected by subsidence. Unfortunately, there’s no definitive answer that will cover all circumstances, as each case will differ greatly. Numerous factors are at play here, from the extent of the damage right the way through to what part of the country you live in...there’s simply no way of putting a sensible figure on how much subsidence will knock off of your property’s value.

One point to bear in mind, however, is that fixing the problem yourself will generally be cheaper than offering the property to market with the issue outstanding. Should the subsidence be at an advanced stage, many lenders won’t even agree to lend, so it could be your only course of action anyway.

Do I have to declare subsidence when selling?

This is somewhat of a grey area. While you should definitely let prospective buyers know about any major issues, you are not necessarily obliged to do so. This is obviously deceitful and not recommended, but you can effectively avoid telling a buyer about subsidence without putting yourself in a legal predicament.

That being said, should you be asked about subsidence, or any other issues for that matter, you could be sued for misrepresentation if you do not declare it fully, and the likelihood is that you will be asked. Honesty is by far the best policy in this instance, as trying to cover it up will run the risk of landing you in court.

Between your estate agent’s Property Information Questionnaire, the buyer’s conveyancing solicitors checks, and their surveyor’s surveys, it’s extremely likely you will get caught out and have to face the consequences of your actions.

So, to reiterate, the likelihood of pulling the wool over your buyer’s eyes is negligible, and you should also consider the moral and (potential) legal implications of trying to do so. Do the right thing and be straight with your buyer.

After all, it’s what you’d want if the shoe were on the other foot.

This is a huge topic in itself, so we've put together another post to cover it in depth: Buildings Insurance And Subsidence

Buying a house with a history of subsidence

Your natural tendency may be to run a mile from a property with a history of subsidence, and that’s perfectly understandable. However, it’s not an impossibility to successfully purchase such a home and get a satisfactory result that all parties are happy with.

There are a few things you’ll need to do to achieve this, though:

How to fix subsidence 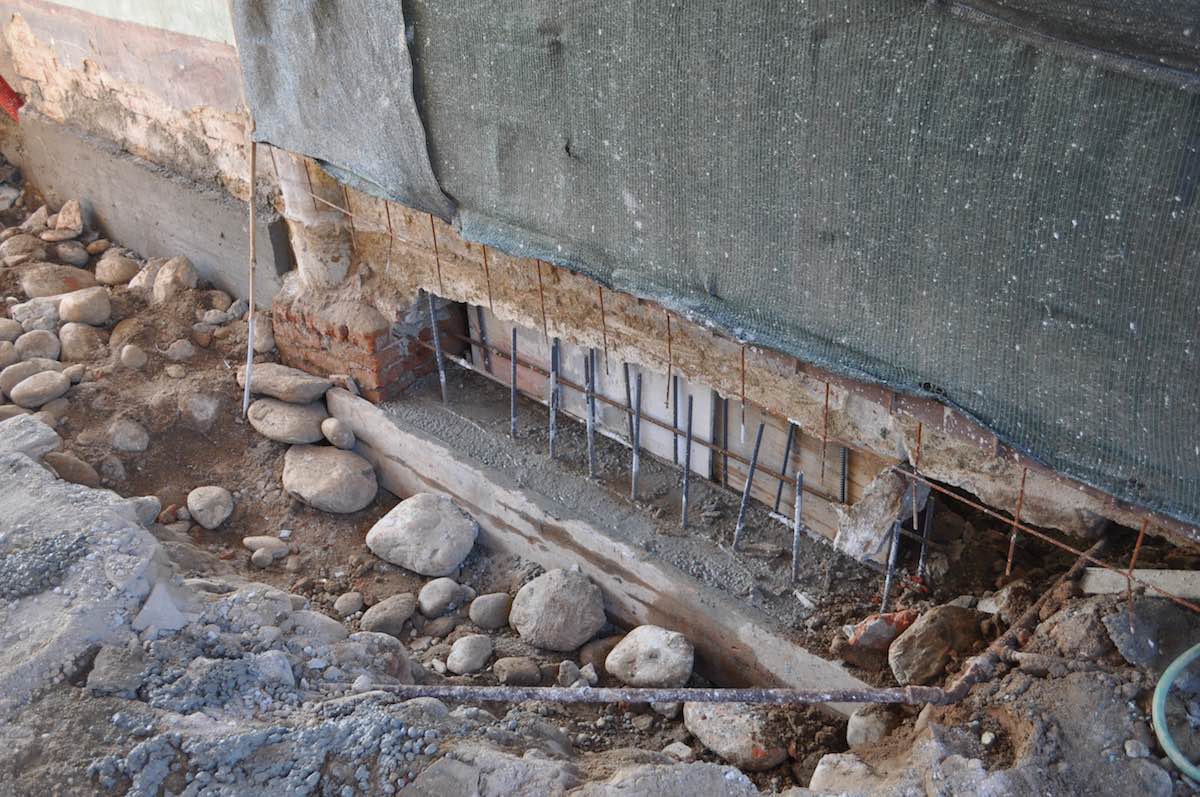 How you fix subsidence will largely depend upon what has caused it to occur in the first place. Tree roots are a common cause and a relatively easy fix (but you’ll still need to take advice from a surveyor and a tree surgeon), as are burst water pipes, whereas serious subsidence from shifting soil could require underpinning.

This can be an expensive process, but it’s thankfully rare for a property to require it. In fact, a recent report by the Royal Institution of Chartered Surveyors (RICS) estimated that less than 10% of subsidence cases actually need underpinning to solve the problem at hand. This is good news, as the process can cost as much as £50,000 to carry out!

However, the typical cost of fixing subsidence issues is thankfully much lower than that, with the average figure claimed being £6,250 according to the Association of British Insurers (ABI).

How to prevent subsidence

Our final section in this guide to subsidence is all about prevention. After all, stopping something happening in the first place is always far easier, and cheaper, than dealing with the consequences further down the line!

Planting innocent looking trees and shrubs has been the downfall of many a homeowner in the past. Just as a cute lion cub will grow into a 420 lb giant before long, so too can a little plant or tree grow to gargantuan proportions if left to their own devices...and these mature specimens need a lot of water to keep them happy.

Keep trees a safe distance from the home if you’re planting from scratch. This excellent resource from the aforementioned Association of British Insurers will give you a rough idea of where some usual suspects can be safely planted: 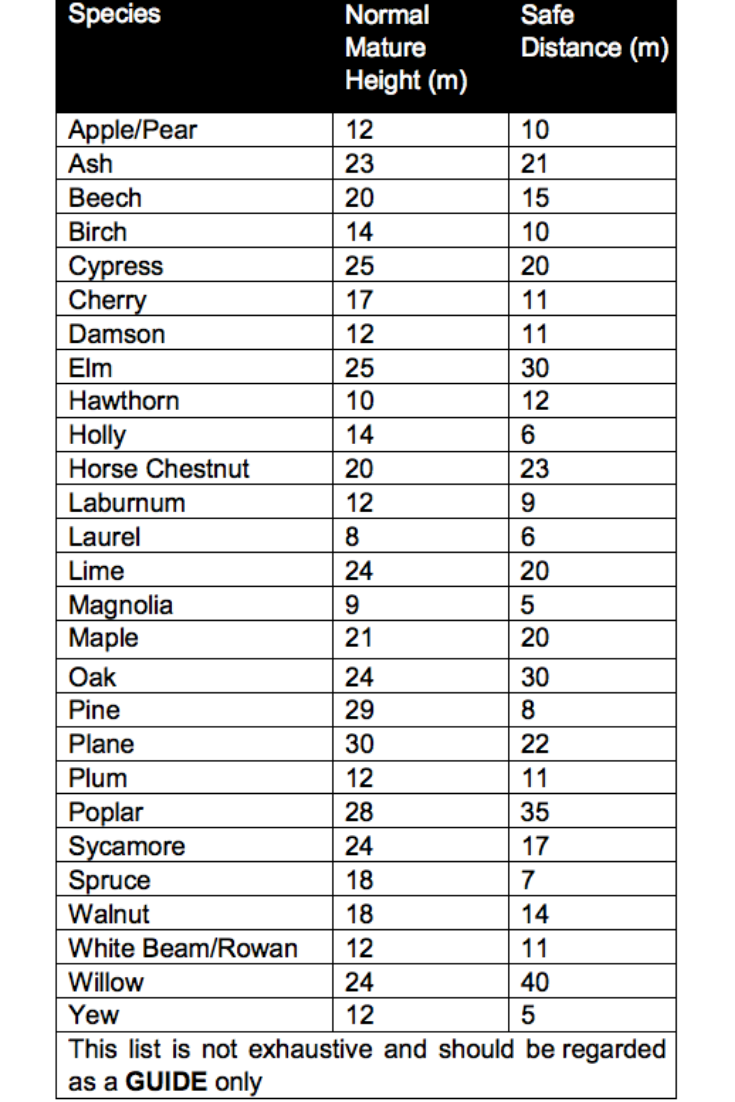 If you have moved into a property and have existing trees closer to the house than you’d like, or even if you’re surrounded by thirsty shrubs like pyracanthas and roses, you might think that getting rid of them ASAP is the best course of action, but not so fast. Removing existing plants and trees can have an adverse effect, too.

Getting rid of them can cause instability, water-logging, and other associated problems. It’s far better to consult an expert, such as a tree surgeon or landscape gardener before uprooting any established growth.

Another option is to simply indulge in hard, regular pruning. This will temporarily stunt the growth and the plants search for water will be lessened. However, regular is the key word here as, if left, hard pruned shrubs and trees will often grow back stronger and bigger than ever!

When it comes to drainage, the rules are fairly simple. Keep drains clear at all times and check guttering regularly. Using water butts can serve a dual purpose of keeping water away from the home and save mains water when it comes to watering your garden. Similarly, maintaining external pipework is essential, too, so make sure you keep an eye on your property’s plumbing outside as well as in.

That’s just about it! If you have any other property related problems, questions, or queries you’d like advice on, give our team a call. We’re always happy to help. 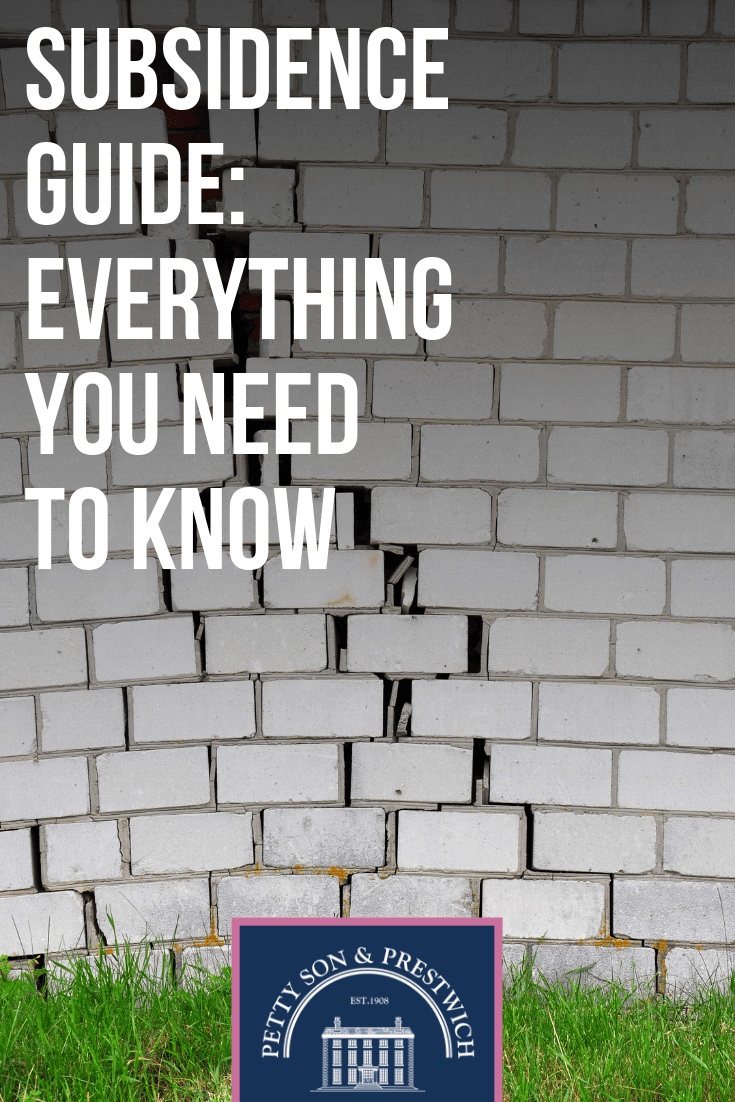