Mould In Rented Property: Who's Responsible? Landlord Or Tenant?

The state of rental accommodation in the UK has improved dramatically over the last few decades, but there’s one issue that still plagues both tenants and landlords: Mould.

A key problem here is that both parties, landlords and tenants, are actually responsible for keeping mould at bay. It is, therefore, too easy for one to blame the other, which can cause the mould problem to escalate as both sides concentrate on criticising the other rather than working together to address the root cause.

Responsibilities differ between landlord and tenant, of course, but both must play their part. In today’s post, we’re going to explore and clarify who is responsible for what and give guidance on what you should do if your landlord or tenant truly isn’t pulling their weight.

Common causes of damp and mould in residential property 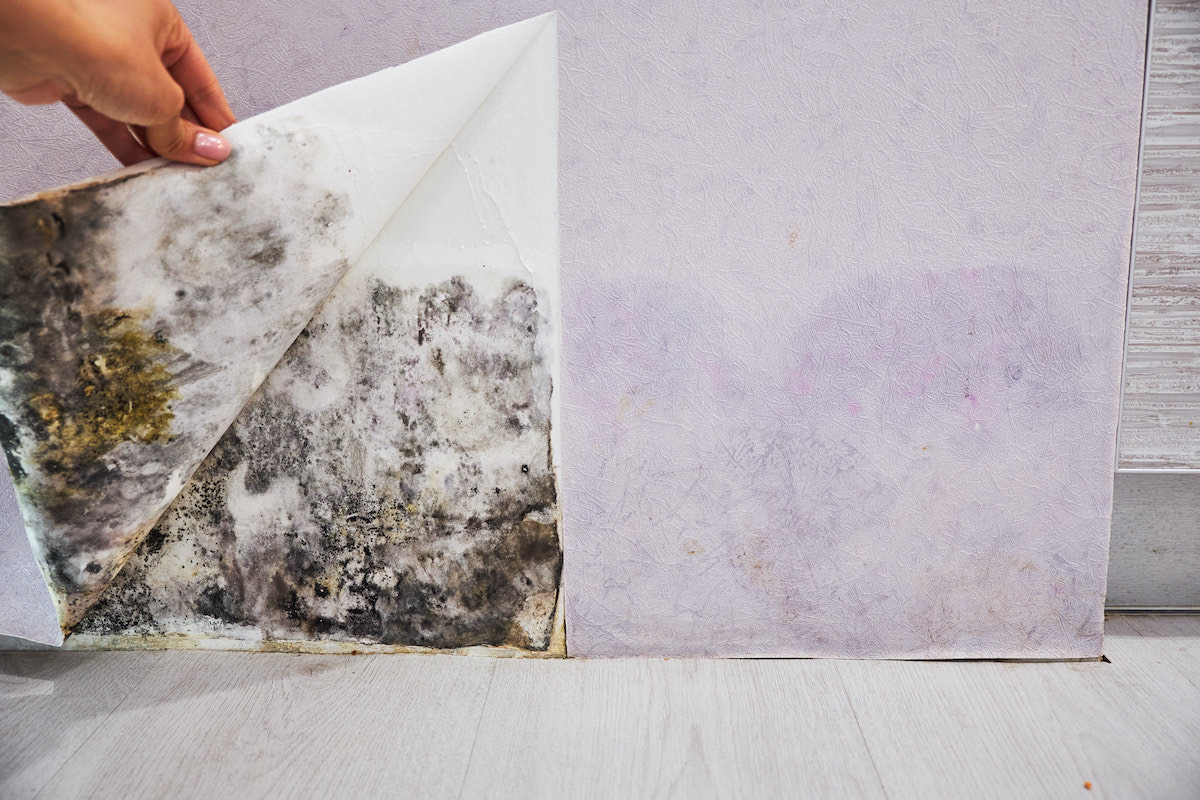 Before we look at the individual responsibilities tenants and landlords have with regard to mould in rented accommodation, it’s important to go over what the cause of the problem might be. While there are many reasons why mould can take hold, all can be banded together into three main categories: Condensation, rising damp, and penetrating damp.

Let’s take a closer look at each:

Condensation is, unquestionably, the most common reason why properties become damp and mould is allowed to flourish. The problem, like all other causes of damp and mould, is not restricted to rented homes, but some of the worst cases occur in rentals as the issue can, unfortunately, get left.

The good news is that condensation is usually the easiest of the three categories to address, although it does take diligence and effort to keep it at bay. In most instances, controlling condensation is an ongoing affair, as opposed to a fix and forget solution.

Damp and mould caused by condensation can be the responsibility of both the tenant and landlord, but the underlying cause needs to be identified in order to ascertain who exactly needs to do what. More on this later.

Rising damp is much more difficult to deal with than condensation, but it’s also, thankfully, a lot rarer. Rising damp occurs when ground moisture makes its way up through the brickwork and walls of a property, hence the name. This happens by way of capillary action.

Rising damp is commonly associated with older properties, but newer homes can be affected as well. This is especially true if the property has recently undergone repair work that may have damaged the DPC (Damp Proof Course), a water-resistant and non-absorbent material used to form a barrier for rising moisture.

Ninety-nine times out of a hundred, rising damp will be the landlord’s responsibility to sort out. In some rare cases, the tenant may be at fault if they have interfered with the DPC in some way, but this isn’t usually the case.

Penetrating damp is a little more straightforward than rising damp, although the source of the problem needs to be found in order to solve the issue.

As the name suggests, this kind of damp occurs when water is actually penetrating the structure of the property, although certain problems (usually to do with the property’s plumbing system) can result in penetrating damp occurring internally, too.

Things such as leaking pipework or missing slates on the roof are the most common causes of penetrating damp, all of which fall under the umbrella of ‘repairs’. This means that penetrating damp is the responsibility of the landlord, not the tenant. 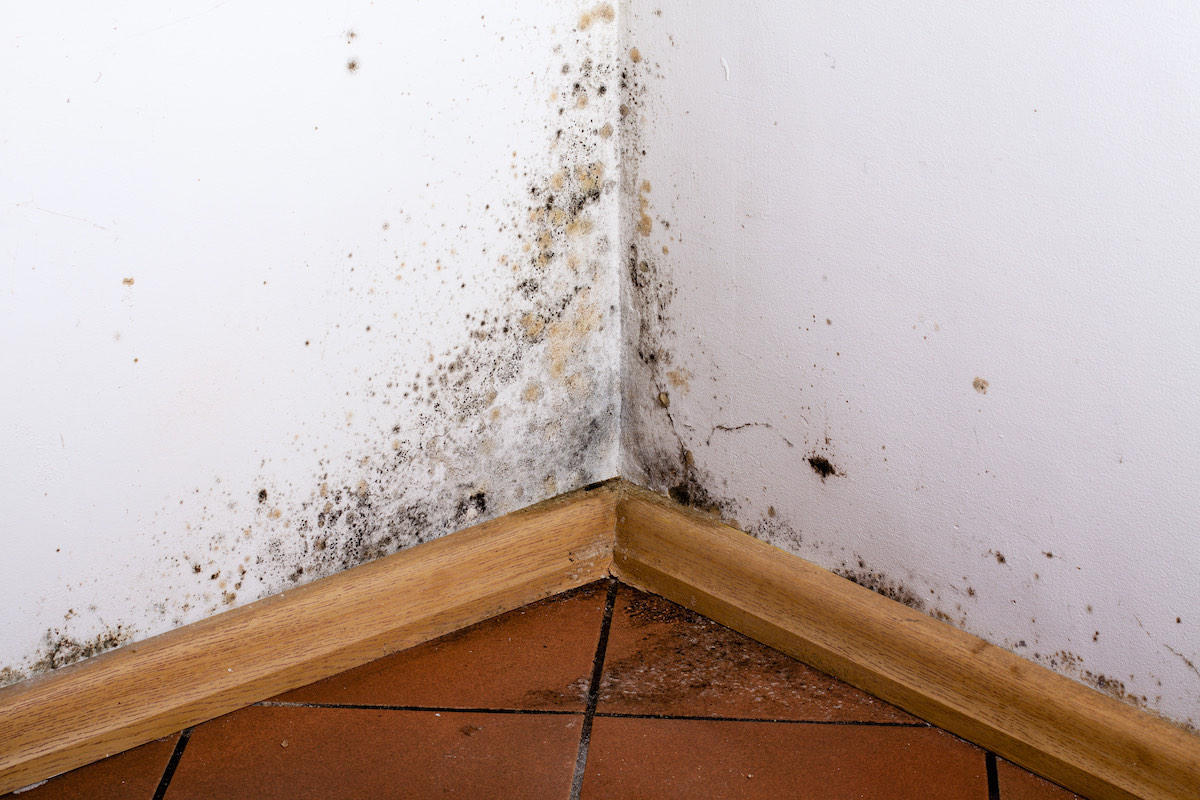 Damp and mould in the home is unsightly, but their presence goes way beyond aesthetics: they can also seriously affect our health as well.

Respiratory problems are the most common negative consequence of a mould and damp issue, with increased likelihood of allergies, asthma, and infections for inhabitants who are exposed to mould. It can also negatively impact our immune systems, too.

Most at risk are children and the elderly, although those with underlying health conditions such as eczema or existing respiratory problems are also advised to steer clear of damp and mould wherever possible.

So, who’s responsible for what?

We’ve already touched on a few instances where the responsibilities are clearcut, but let’s go over both parties mould-busting roles in depth, shall we? 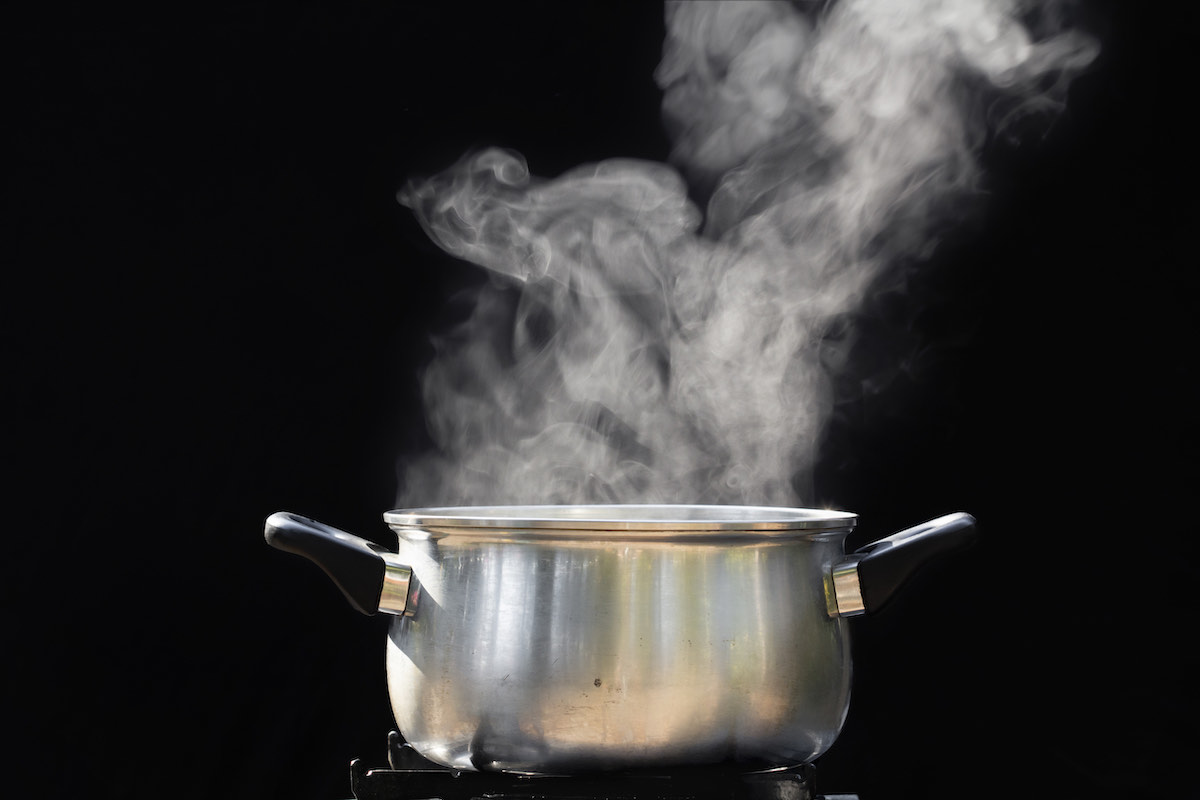 In the vast majority of cases, tenants' main concern in the prevention of mould and damp will be to keep condensation in the home to a minimum. While condensation can be caused by issues where the onus of responsibility lies with the landlord, such as inadequate insulation or faulty heating systems, for the most part it’s day-to-day living that is to blame.

Making a habit of addressing two key areas will help tenants keep condensation under control: heating and ventilation. Keeping your home warm and well ventilated will make a dramatic difference, as there will be fewer cold spots and less moisture in the air - the two things necessary for condensation to occur.

Here are a few moisture controlling actions you can incorporate into your daily life:

Simple changes to the way you live, such as those listed above, are all that’s required to keep condensation in check. They’ll also likely form part of your tenancy agreement, so they’re important to adhere to.

In property-speak, this is referred to as behaving in a tenant-like manner, and it’s your responsibility to do your bit as much as it is the landlords to do theirs. 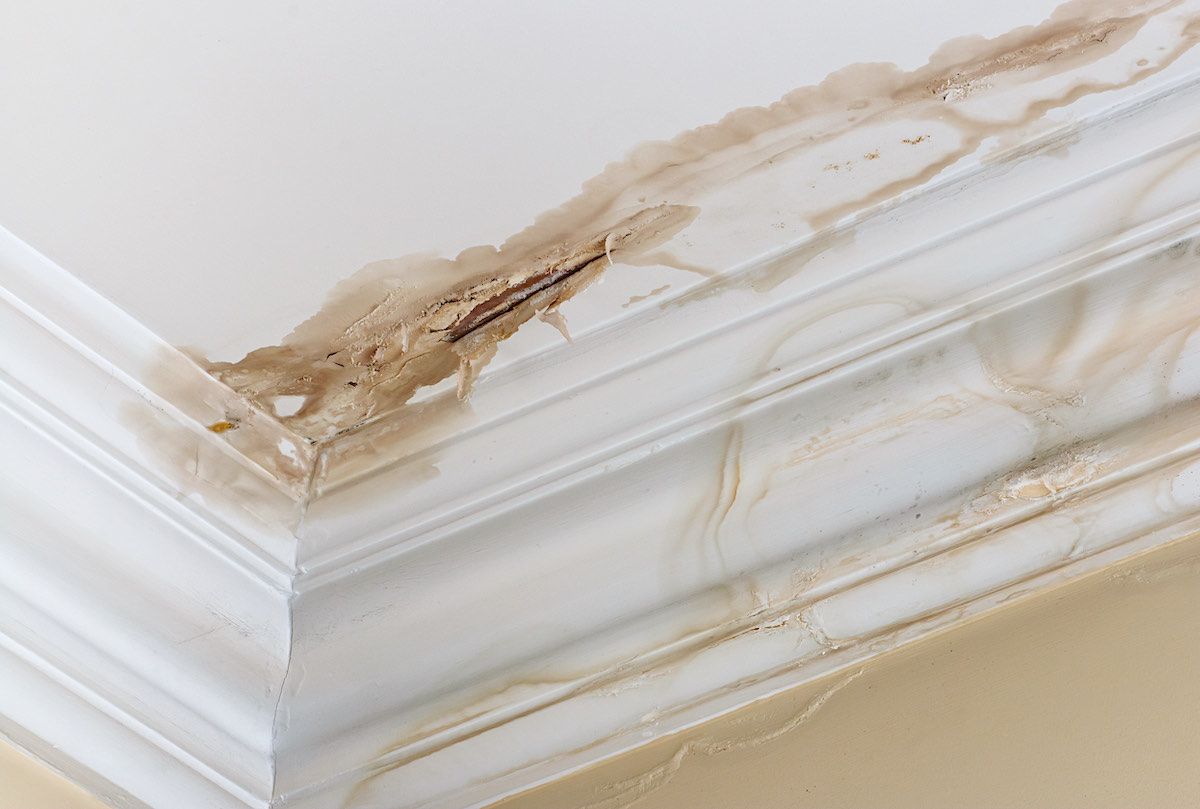 Damp and mould problems need to be addressed by the landlord when they are either affecting the tenant’s health and safety or are caused by a problem to the property that can be taken care of by way of a repair.

It is the landlord's responsibility to ensure any property they let to a tenant is fit to live in, and that means from the moment the tenancy starts to the minute it ends. This falls under the Homes (Fitness for Human Habitation) Act 2018.

Common repairs include, but are not limited to, things such as:

Contrary to popular belief, most landlords will do all that they can to ensure their tenant’s needs are met, so tenants shouldn’t be scared to bring issues to their landlord’s attention if they feel they need to be addressed. A tenant’s home is their investment, so most landlords will want to look after it just as much as tenants want a home that’s fit to live in.

Communication is key here. Tenants should explain exactly what the problem is and how it is affecting them. They should also bring up any damage to their personal property caused by the damp and/or mould at this point, too. Even if major repair works aren’t necessary, many landlords will be open to the idea of improving the home in some way, be it better ventilation or improved insulation.

That’s it! Now both parties should be clear on who-is-responsible-for-what when it comes to sorting out damp and mould issues in a rented house or apartment.

If you need help, either as a landlord or a tenant, speak to Petty’s. We’ve been an integral part of East London’s property landscape for over a hundred years, and we’d love to add you to our ever-growing list of satisfied customers.

Give our experienced and friendly lettings team a call today to find out what makes us stand out from the crowd. 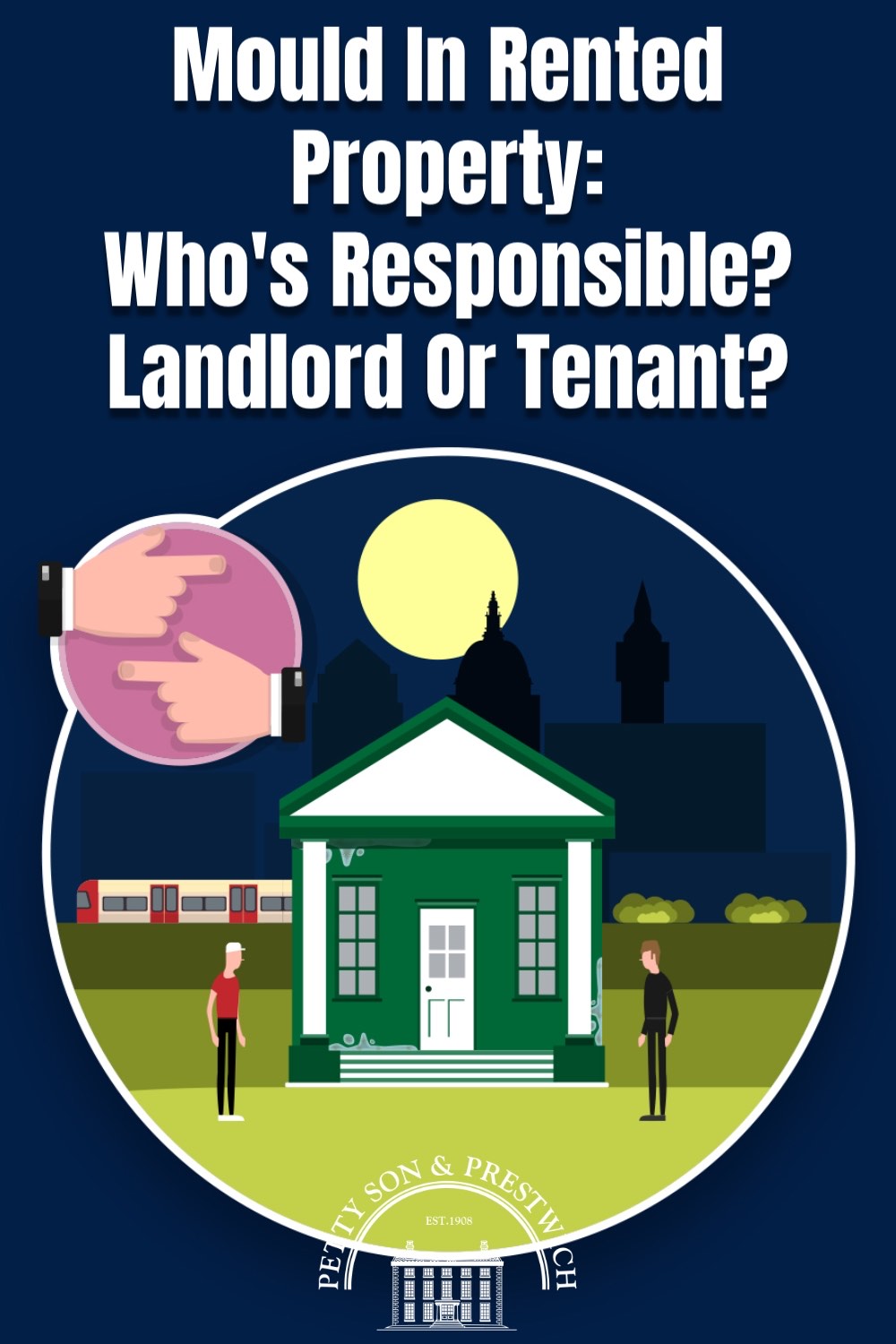