Should Landlords Let Their Tenants Decorate?

This is a thorny issue, and one that regularly comes up in conversation when people discuss the merits of buying or renting a property. It seems everyone is in agreement that it is difficult to make a house feel like a home without a few personalised touches, but how far should tenants be allowed to take things? Is it a good idea to let them decorate in order to keep them happy and, hopefully, secure a longer tenancy? Let’s find out.

What the researchers say

As with any hotly debated topic, research into whether or not tenants should be allowed to decorate has been carried out. Insurance provider Endsleigh conducted a survey that asked 1,000 tenants how strongly they felt about decorating their rented property, and the results were rather surprising.

An astonishing 43 per cent of those questioned said that they would be willing to pay more to their landlords in rent if they were allowed to personalise their homes. The average figure across the country that tenants would be happy to pay for this privilege stood at £149.52 per year – which equates to a whopping £530 million being left on the table by landlords up and down the UK.

According to Endsleigh, only 29 per cent of those surveyed were allowed to make changes to their property’s décor. Twenty per cent said that they would be either ‘likely’ or ‘very likely’ to avoid having family and friends round to visit if they felt embarrassed by the way their home was decorated. With a quarter of those who took part living in rented accommodation for three years and over, it’s easy to see why this issue is so important to tenants.

What are the biggest decorating bugbears for tenants?

Tenancy agreements often lay down the law on what occupants are not allowed to do in terms of changing how the property looks while they are renting. That being said, research shows that landlords can be flexible on certain things, but tenants rarely take the opportunity to ask.

Thinking that the tenancy agreement is set in stone is a mistake, but one that is commonly made. In fact, only 28 per cent of tenants are willing to ask their landlords if they can make improvements to the property. However, of those 28 per cent who are prepared to ask their landlords about changing the décor, 76 per cent get the go ahead despite their tenancy agreement stating otherwise.

So, what are the changes tenants want the most but are prohibited from doing under the terms of their tenancy agreement? The top five are:

What should you do as a landlord?

As you can see from the list above, the requests from tenants are not really the end of the earth. Allowing your tenants to feel more at home can result in longer tenancies with happy tenants who are more than willing to sing your praises. This, in turn, could lead to more business for you and decrease the possibility of incurring void periods every 12 months while you wait for new tenants to move in.

Nevertheless, it’s easy to see why landlords are sometimes reluctant to grant such requests, too. If you have just shelled out for redecoration yourself, do you really want to allow tenants to make changes simply on the grounds of personal taste? Possibly not. But, happy tenants should always be paramount in your mind if you really want to make a go of being a successful landlord.

This doesn’t, however, mean that you have to hand the tenant a free rein. While being flexible will improve your relationship, it’s still vital to have some sort of boundaries in place. The tenancy agreement is a good place to start as it allows you to make a decision on each request on a case by case basis. It’s an unfortunate fact, but some tenants are simply more trustworthy than others, so having such parameters will give you the option of granting permission or not.

Regardless of which side of the fence you sit on, landlord or tenant, Petty Son and Prestwich can help you get what you want. Call our expert lettings team today on 020 8989 2091 or email This email address is being protected from spambots. You need JavaScript enabled to view it. to find out more. 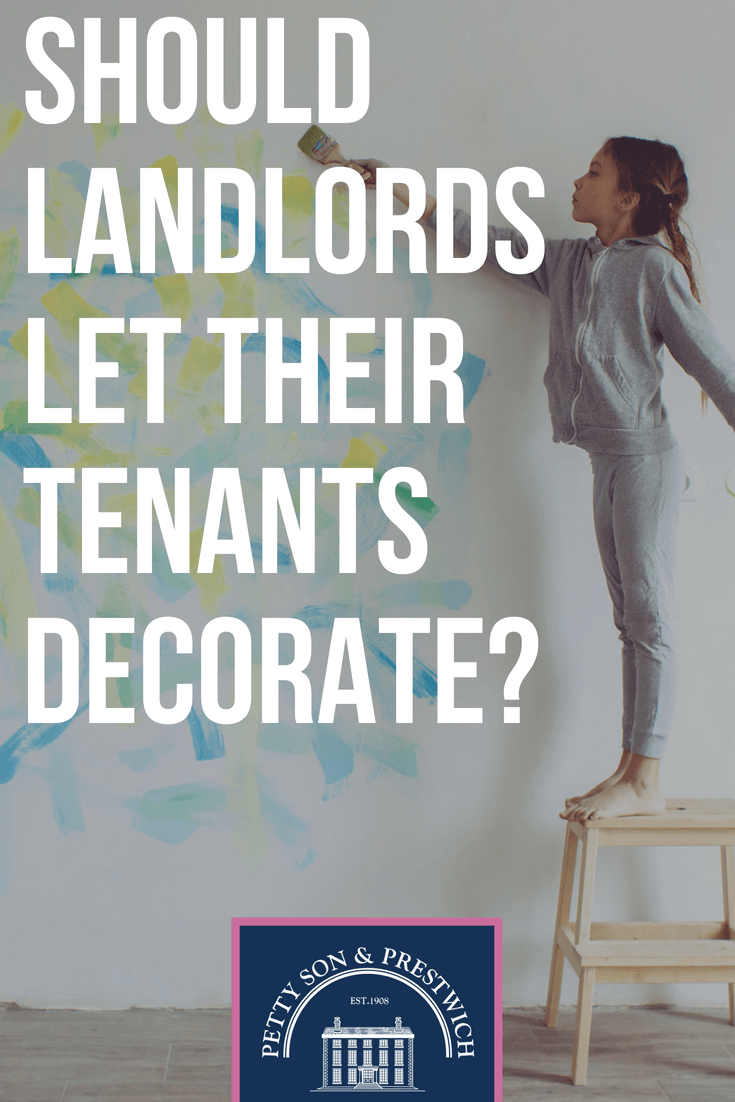